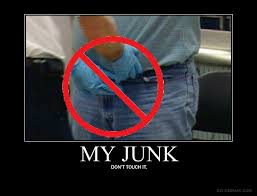 With the latest intrusion into the travel industry by big Sister, we now have X-ray machines that display your naked body to prove you are not a terrorist. If you choose not to undergo the scan you can opt for a through groping by a federal employee who may or may not touch your junk. So while 0.02% of travelers are terrorists the other 99.98% of us are now being treated as potential terrorists with our only crime having been the purchase of a ticket to ride on an airplane.

I have a better solution, and the first step is for the federal government needs to get out of the airline security business.

The second step is to identify the party most motivated to provide security for air travel.

The answer: the private businesses that make up the airline industry. The owners of these multi-million dollar pieces of equipment have a huge and immediate stake in keeping their investments secure. Also, the airlines are not in business to have their customers injured or killed.

Therefore what Homeland security should do is give security personnel hired directly by the airlines total jurisdiction to screen passengers by any means necessary. If a bouncer can deny me entry to a bar for whatever subjective reason he can come up with, then the airlines should be empowered to do the same. They should also get a pass on any "Discrimination" lawsuits as it pertains to security.

How would this be better?

First, no excessive pat-downs of grandmothers, toddlers or nuns.

Because any airline that gains a reputation for unnecessarily harassing their customers will loose said customers to competing airline with better screening processes.

This would also mean less cost of personnel at the airport, less expensive equipment (because the use would be limited to when necessary) and more overall security.

I believe that the government can also have a role in this system as well. Currently anyone purchasing one-way-tickets with cash are immediately flagged as potential drug dealers (I know this because a former co-worker of mine who was a frequent flier told me about being questioned by security on one of his business trips). But anyone purchasing a ticket usually does so with a credit card, and tickets require you to provide a name for every ticket purchased. It would not be difficult for FBI and CIA watch lists to be cross referenced with anyone purchasing a ticket. They would then alert local airline security to prevent any malevolent behavior.

Okay, yes I am suggesting Profiling.

But Profiling is done all the time. The highway patrol doesn't set up drunk driving checkpoints on Arbor day, but they do on New Years eve? Why? Because more people are out drinking on New Years! Is this profiling? In a way, yes. But in a bigger way it is a more reasonable allocation of resources. If you had a checkpoint on every street pulling over every car to check for drunk drivers at nine in the morning that would sound silly. But somehow that mentality has lead to the harassing three-year-olds as potential terrorists by the federal government.

Sure there are a lot of non-terror-seeking Muslims that fly, and they would be more likely to be additionally screened under this system than the average white-collar traveler, but so far the few Muslims that have caused problems have ruined it for all of us. But if those few bad Muslims had only ruined it for all Muslims then we might see more of an outcry from the American Muslim community about foreign-born terrorism than we have seen in the past 9 years.

Maybe I’m overreacting, but if a TSA worker is going to feel me up they should at least have the courtesy to buy me a drink first!

Posted by azoric at 6:31 AM No comments: