Mr. Pimpmobile: Gone But Not Forgotten


I think we’ve all met this certain kind of individual. The type that after a while you wonder how they get their shoes tied in the morning. You wonder how they hold a job or why they’re allowed out of the house without wearing a helmet.

Mr. Pimpmobile is one of these people.

It’s been about a year since I’ve seen my nemesis, though I happen to see the Pimpmobile at Kroger one day last winter. But apparently Mr. Pimpmobile misses me.

Now It’s been a few years sine I’ve moved. But as I recall I pretty much had the new address memorized within a few days, and within a year, I was getting all my junk mail at my new address.

Well yesterday afternoon as I was chillin’ with some Seinfeld reruns after work, there is a knock on my door. My hippy dippy neighbor lady said that a package was delivered during the day and she signed for it.

Not expecting anything I thanked her for it and started to open it. That’s when I saw the addressee. It was addressed to MR. PIMPMOBILE!!! Ladies and gentlemen, a year after moving he’s still giving out his old address!

Now at this point I ceased opening up the package because even though I have no idea what’s in the box I’m very sure it’s not something I would want.
Posted by Unknown at 6:42 AM No comments:

Who are you calling a Hallo-weenie? 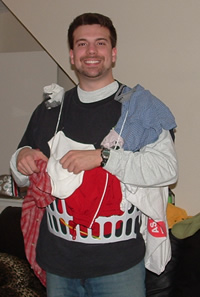 Winning the prize for most original costume: PRICELESS!

Is it just me or is TV better these days? Yes I know that’s a silly question; how could I get any better?

About a year ago I read an article in the Wall Street Journal that stated “Television has traditionally been a writer’s medium and Movies a medium for Directors.” The article went on to describe that the decreased cost of visual effects due to the use of computer imagery has put many TV shows on a par with our favorite Hollywood Blockbusters.

The article went on to site shows like Smallville and CSI as being among the most popular and using the new digital media technologies to tell their story.

This, combined with the fact that Hollywood most movies are remakes these days shows that these effects are nothing without good writing when it comes to movies.

And the timeliness of this post has everything to do with tonight’s premier of Lost. So as a tribute to the most important season premier of the fall, here is my review of highlights of this season so far.

Sunday Night Football
NBC Sundays 8:00
Football returns to NBC with host Bob Costas, and his team of pundits, Jerome “The Bus” Bettis, Sterling Sharpe Peter King and Chris Collinsworth host a high quality, excellently polished football show. Madden and Michaels do the play by play during the game which means you only actually have to listen to Chris Collinsworth during half time. That when you should actually be in the kitchen opening another beer anyway!

Till Death
Fox Plugging all holes in the weekly lineup
Brad Garrett only a year removed from “Raymond” is now leading a series as the disillusioned married man mentoring a newlywed neighbor. There you go; the basis for every episode. I probably wouldn’t have mentioned this show other than the fact that Fox airs this show about 3 times a week just to get you to know that “we got the Raymond’s brother!”

Heroes
NBC Monday’s 9:00
On the surface, it’s X-Men. And they’re up front about it. They even make references to X-men comics and other science-fiction works. However a good idea is a good idea, and when you add good writing and acting into it you have a very intriguing story and characters you can empathize with. Unlike last season’s Surface NBC seems very intent on promoting this show to success. The show’s Jump-the-shark moment could come if the story-within-a-story plot device comes off as cheesy. So far, so good.


Jericho
CBS Wedyesdays 8:00
Last season when the networks decided to fling as much science fiction at us as possible due to the success of Lost in 2004 we got a lot of eye candy that didn’t stick around for the whole season. The problem with these shows was that they focused wholly on the science fiction element and not on the gripping human drama that is the heart of Lost. Jericho finds that formula and correctly implements it. Jericho is a small Kansas town that is cut off from the rest of the world when a mushroom cloud is seen in the distance over Denver. With no communication and resources limited, the townspeople must work together to survive post nuclear America. It really is Lost in the Midwest fully taking advantage of an ensemble cast to portray gripping drama. Jumping-the-shark could come when they run out of nuclear-bomb related conflicts. Then again I never thought being stranded on an island without Maryanne and Ginger would never last 3 years!

The other shows premiering this fall:
Ugly Betty: the title just doesn’t appeal
Studio 60 on the Sunset Strip: I don’t watch shows with Alec Baldwin
30 Rock: This is the show with Alec Baldwin? Aside from the Baldwin factor I really can’t tell the difference.
Friday Night Lights: Why is this on Tuesdays?
Smith: The most common name for a TV show.
Daybreak, Kidnapped, Standoff, Vanished, Runaway: All basically the same show.
Posted by Unknown at 1:19 PM No comments:

The Backstreet Pub is closed!

I recall the day I first saw my condo and was standing on the front porch with my realtor pointing at the sign in the back of the strip mall across the street and saying, “I drink there!”

Yes, walking distance from a place that has Miller Lite on tap is a selling point in my book!

But last weekend Brett and I were having a couple beers and he pointed out to me that the booths up against the window were gone and that one of the plasma TVs was removed.

Me being an optimist asked the bartender on duty why all the changes. Her line was that they were having the carpet cleaned. That sounded reasonable enough. However on Wednesday Brett emailed me to tell me it had closed.

So now I am a man without a home.

Thursday night I walked into the Gooseneck Tavern in Powell. Immediately Kristy, the lovely bartender on duty, knew why I was there.

Friday, I tried Chubbys… unfortunately it’s a bar run like a resturant, so at 1:00. That’s about the time I still had 5 songs left on the jukebox.

The Backstreet used to let me stay at least until the jukebox ran out.

I ran into Jason at Spoonz… That was the first bar I knew about when I moved to Columbus. I also haven’t closed that place down in quite some time. He told me that he and some mutual friends go to The Hard Road Café for the Buckeye games. So Saturday after the Buckeyes beat Iowa 35-21 I traveled to Hard Road for a beer, or three.

Not everybody knew my name there, but at least a few familiar faces, cold beer and I got to listen to the worlds worst rendition of “Feed My Frankenstein”. Saturday night is Karaoke night at the Hard Road… That’s why Saturdays I usually went to the Backstreet.