Movie review: War of the Worlds.

When I first heard that a new film version of H.G. Wells’ War of the Words was coming out I was concerned for two reasons given the names attached to the film. First off there’s Stephen Spielberg who has been rather preachy in some of his films lately. His left-wing politics have caused some of his later films, such as A.I. to be panned by both critics and fans. Then there is the ever-inconsistent Tom Cruise. He’s a baby-faced actor who cant’ decide weather he’s an action hero or a playboy. (Speaking of which, I swear he and Téa Leoni could be twins.) 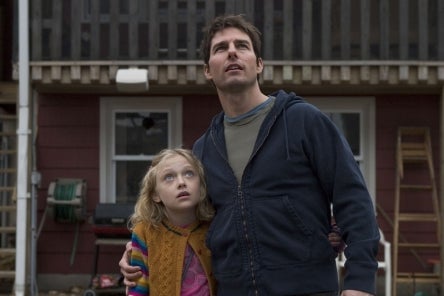 The result of this partnership is a high quality film that ensures that both these names will be around in Hollywood for sometime to come.

Set aside the fact that Hollywood is officially out of original ideas. That’s a rant for another time. But the source material here is of good quality and the bar set by the previous film version of this story is quite high.

Spielberg returned to the fundamentals of filmmaking that made his reputation in Hollywood. Just like Jaws and E.T. this story revolves around an everyman. Our hero is New Jersey crane operator Ray Ferrier (Cruise) who is about to spend a weekend at his modest home with his kids who were left at his house by his pregnant ex wife who is about to head to Boston with her new husband. In just a few moments of his family interaction you find out exactly why the marriage ended and you see that she definitely traded up.

This exposition is quick and very poignant, never leaving you worried that there is going to be too much character development and not enough aliens.

Because the aliens arrive just two blocks away. This sequence’s intensity results in an emotional reaction by the viewer for the ordeal in which Ferrier has just survived. Gone are the triangular spark-shooting hovercrafts from 1953. Instead we have a truly menacing alien mechanized assault vehicle compete with jet turbines, lasers and blood-sucking tentacles. It’s a visual that lets you know without a doubt that these are the bad guys, the same way that you knew Darth Vader was the bad guy without an introduction.

Cruise portrays the father fearful for his children passable enough to be believable in the role. However it is Dakota Fanning as his daughter Rachel who subtly steals her secenes. She is sharp and intelligent with perfect dramatic timing. Not only is she a fear filled ten-year-old she also convincingly conveys an anxiety disorder.

The film’s action is intense. With alien walking creatures zapping people and destroying entire city blocks in mere moments. However, we do get a slight taste of the realism of war seen in Saving Private Ryan when the Army mounts a vein offensive against the invaders. This was really the biggest change in updating the film: Army guys shooting at aliens, though Will Smith had better one-liners. Unfortunately some of the fighting scenes were done at the cost of filmmaking inconsistencies and a less dramatic turn of events for the humans. Why is it that the aliens can disable every piece of technology on the planet except that which could be used to attack them.

Giving credit where credit is due goes to Spielberg who did a great service to the movie going public by NOT screwing with the ending. The 1953 version featured much more a dramatic turn of events in literally the last minute of film, but it was the narration that properly wraps up the film. Yes that is Morgan Freeman’s voice reciting the opening and closing passages of Wells’ tome. With those narrations and the general premise of the 1953 film in tact War of the Worlds is a high quality film.