Dear Mr. Pimpmobile, thanks for the memories.

What is Big Brother without Goldstien? Or Superman without Lex Luthor? Huey Lewis without The News?

What is Andy without Mr. Pimpmobile?

Probably better off than Huey Lewis without The News!

I came home from church later than I expected yesterday. I had forgotten the date of the harvest festival, for which I was supposedly in charge of a pumpkin carving contest. Fortunately bad weather and everybody else’s poor planning was on my side so the harvest festival was canceled and we roasted hotdogs on in the fireplace in the back of the church.

Now I was a little anxious as I was blackening wieners over hot coals (Boy does that sound like the punch line to a dirty joke) because the longer I stayed the more of the Steelers Bengals game I missed. And with the Steelers on regular tv, I needed to use my perfect Steeler setup to watch the game properly as Steeler fans should.

But I didn’t immediately jump out of my car and into my condo to set up all the proper electronics for the game. I took a lap around the parking lot because there was a moving van in front of Mr. Pimpmobile’s house.

Now I’m really not a jerk to this guy, but he thinks I’m a jerk. And people typically ascribe attributes of themselves to people they don’t know very well when describing them. So Mr. P. had parked the U-haul diagonally across three parking spaces in order to not be in my space. What was I going to do? Have him evicted?

Believe me I’d have quite willingly parked someplace else to provide easier access for him and his moving van.

It’s not that I wasn’t willing to help, it’s that… well I doubt my help would have been welcomed. (see the note abut being a jerk above) So I stayed in and watched the Steelers make a statement to the AFC North. Normally I get annoyed with the banging, stair stomping and door slamming that has come from next door for the past 2 years. But this day, it was music. They were loading the U-haul.

I sat through 2 loadings of that vehicle and a 37 – 13 win for Pittsburgh. It was a very good day.

Now no story is complete without a second act in which our protagonist (me) is in danger of not coming out triumphantly. This story has such a part. Upon getting ready for bed I looked out my office window to see the Pimpmobile and Mrs. Pimpmobile’s Sebring in their normal parking spots.

I’m not sure why people would load a U-haul at least twice in one day then spend the night in the emptier of two dwellings. Yet it would be one more night with these neighbors.

I got up for work the next day and took what would likely be my last gaze upon the Pimpmobile. For when I came home from work today, I was greeted by a pile of trash in the alley behind the condos.

Yep, that’s all that’s left of Mr. Pimpmobile... well that and one very oily parking space. 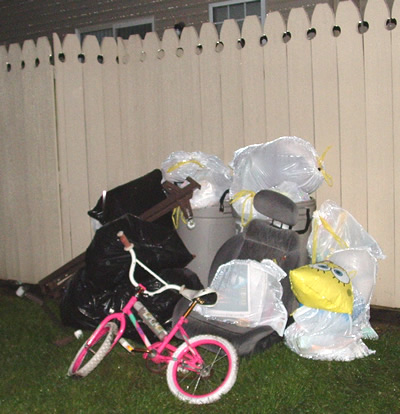 As you can see there is a child’s bicycle. I took that out of the pile and I’ll be giving that to my church in hopes of a deserving child getting the best end of that deal. Also those look like the original seats of the pimpmobile (I recently noticed they were replaced by black leather seats embroidered with flames).

Well, This is probably the last post for Mr. Pimpmobile. Thanks for the memories. We hardly knew ye…
Posted by azoric at 6:39 PM

yet another FANTASTIC laugh my ass off blog that was worth EVERY second that I took to read it. Andy you are brilliant...But don't get cocky...because MY BIKE is a 10 speed....

That is a good point. I found another lexus new site that goes into even more lexus newdetail.

So long Mr. Pimpmobile...too bad you never got an MTV spot.

Great ending to a funny story.

I love that he got flame seats, TOTALLY HOT.