Why do pretty blonde girls make such bad decisions?

In a divergence from the ordinary, I am not going to be talking about either Al Gore or the iPhone, instead one of my other favorite topics: Pretty blonde girls who make bad life decisions.

Nothing makes for better news than a pretty blonde girl in trouble, be it Jessica Lynch, Natalee Holloway or the latest cable news sensation Miss New Jersey: Amy Polumbo.

Polumbo has been at the center of controversy because someone has sent “embarrassing” photos of her to pageant officials that could cost her the title of “Miss New Jersey” and possibly her slot in the Miss America pageant.

On the Today Show Miss Polumbo said that these photos "were meant to be private" when the put them on the internet.

For those of you who do not know, the internet is a series of interconnected computers networked over the whole planet. This as opposed to something that would be considered more private like say, a room with a locked door.

Before you get your hopes up, the photos not nearly as graphic as… well, whatever you’d get your hopes up for when a pretty blonde girl is embarrassed by photos of her that would get her kicked out of the Miss America Pageant.

I will now pose a new theory: Pretty Blonde girls make bad decisions. So if you’re a pretty blonde girl here is a list of five things you should always consider before making a decision:

Now as an endeavor to keep my Miss New Jersey crown (a state I have never actually been to) from ever being taken away I will preemptively post embarrassing photos of myself here: 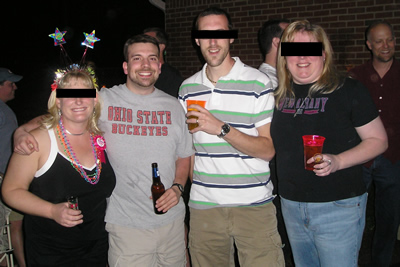 Me at a Tracy's party holding a beer with Tracy, John and sme girl I don't remember (I don't remember her not because I was drunk, she just kind of showed up about the same time John and I got there and Tracy wanted a picture, but we didn't really talk to her the rest of the night).

Me dressed as Clark Kent.

Me dressed as a laundry basket.

Me dressed as Obi-Christ Kenobi.

David Hasselhoff (some of these aren't just embarassing for me).

Yippie! I finally made the blog!