After fan panned episodes I and II a lot was left to be desired in the final installment of the 6-part Star Wars saga.

The franchise starts with the timeless classic trilogy. It was then reprised in 1999 with "The Phantom Menace" The film was a disappointment among fans because it does not answer the question, "How does Anakin Skywalker become Darth Vader"

That brings us to 2005 and the answer we've all been waiting for. Anakin becomes Darth Vader exactly as you think. 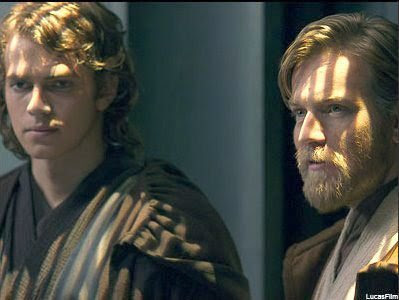 Revenge of the Sith also delivers a darker Star Wars Universe with plenty of lightaber-enduced dismemberment. This is what warranted the PG-13 rating. Children who watch the series as a wholesome adventure epic will be disappointed when their parents won't let them see this film. It is much more adult than any of the previous Five.

The film is a great overall product. The pacing is great with edge-of-your-seat action from the opening star fighter battle all the way to the climactic lightsaber battle (fear not there are plenty of lightsaber battles in between these two events). However the very end does seem a little rushed as there are several loose ends tied up in the final 5 minutes of film.

What makes this movie great is that it seamlessly ties itself with Episode IV: A New Hope (the very first Star Wars move from 1977). By the time this film completes you are ready for that opening sequence in A New Hope when Darth Vader boards the Alderan Diplomatic ship looking for the stolen Death Star Plans.

This film gets 4.5 stars because it delivers what the fans have wanted since we heard there would be more Star Wars films! This intense climactic event of a film ensures that the Star Wars franchise will not fade away with a whimper the way Star Trek did earlier this year.
Posted by azoric at 3:16 PM No comments: