Persepolis does not need a sequel!

First off, this is not a movie review, though I do plan on mentioning a few movies in the paragraphs to come. This is a commentary on the Egyptian revolt currently happening half a world away, yet somehow it all seems familiar? 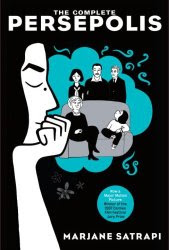 It seems familiar because I’ve seen the movie “Persepolis (2007)”. It is an animated film, based on the true story of a young girl who is just outspoken enough during the Islamic revolution in Iran that her family sends her to France for her own safety. She eventually returns only to find she does not fit in where her now fundamentalist Muslim countrymen.

While I usually reserve the phrase “unnecessary sequel” for movies with words like “Harold and Kumar” in the title, the lack of need for this sequel is more pressing as it pertains to the world stage.

In Persepolis the Shah, the western supported leader of Iran, is overthrown by popular opinion of the Iranian people. However what ensues is the rise of what we now know to be a theocracy of fundamentalist Islam. You may not think that as recently as 1979 that Iran was a progressive city with vibrant culture and tourist destination, but guess what. It was!

Young Marji, through whose eyes the story is told, is excited to learn that the communists were gaining a foothold to take power from the Shah. However, the communists, never acting out of the interest of the population in general, see their best chance at consolidating power by using the predominant religion of the region.

There may be a young Marji in Egypt right now. Much like the Shah’s regime was supported by the west, so is Egypt’s Hosni Mubarak. Much like Iran was a tourist destination where westerners found generally the same freedom they find at home, so was Egypt. In fact I just saw Facebook photos of a friend of mine at the great pyramids just before the rioting started.

The question is, what type of sequel will history write to this story? Keep in mind not all sequels are bad. For instance Rocky II was a much more moving story than the first Rocky movie. But what my biggest fear is for Egypt is that we will get Teen Wolf Too.

Following the success of the Michael J. Fox film Teen Wolf somebody had the bright idea to do another. With either Fox’s skyrocketing success, or his good sense not to be in the second film, we get a half-assed rewrite of the original script with new star Jason Bateman. Essentially Teen Wolf Too is just the same basic plot, with many of the same characters in place and only the location and central character change. It can only be described as a completely unnecessary sequel.

Egypt does not need to be Iran Part Two. Meaning the exact same thing that happened to Iran does not need to happen again only five hundred miles Southwest. The people of Egypt, who will likely not rest until there is regime change, must be prudent in their next steps. Even the people of Iran asked for Regime change in 2009. The government was much more swift to put down that protest and there was no change. However, Mubarak’s administration did shut down the internet as did Iranian President Mahmoud Ahmadinejad. Unless Egypt gets a true democracy, expect more of this oppressive activity, and for it to only get worse.

What will expatriate Egyptians say about their homeland ten years from now? Will they be like Marji and, with a heavy heart, eventually return to post revolution home? Or will there be peace and prosperity in Egypt for years to come?
Posted by azoric at 6:54 AM No comments:

The Adventures of Andy Presents:
IN THE NEWS!

It’s been a while but I can’t help myself today so here are today’s headlines!

Former presidential candidate John Edwards is engaged to longtime mistress Rielle Hunter, according to a report.

The Jan. 17 issue of the National Enquirers says that the ex-North senator asked the mother of his lovechild to marry him only three weeks after burying his wife, Elizabeth, who died from cancer. The couple is said to be tying the knot some time this summer.

Editorial comment:
I’m sure he can’t wait to knock up someone else on the side!

Editorial Comment:
Yes, I agree, The Cosby Show did wonders for the image of Blacks in after the Blacks declared Jihad and destroyed skyscrapers in .

The new study was prompted by the August 2008 discovery of powerful oxygen-busting compounds known as perchlorates at the landing site of another Mars probe called .

Editorial comment:
I’m sorry, I thought this was going to be a story about Brett Favre.

Court ruling opens the door to more nudity on TV...

Call it full moon rising -- soon, there could be bare butts all over the boob tube.

The US Second Circuit Court of Appeals has vacated the $1.21 million worth of fines that the FCC levied against ABC after alleging that the network violated broadcast indecency standards for daring to show actress Charlotte Ross' naked behind during a 2003 episode of "NYPD Blue."

When overthrowing the fine, the court cited the FCC's own declaration that "nudity itself is not per se indecent." It also reiterated that the FCC's context-based indecency test is "unconstitutionally vague," as previously determined by the court when the FCC demanded fines from Fox when profanities were aired during the 2006 Billboard Music Awards.

Additional Comment by Marge Simpson:
” Fox turned into a hardcore sex channel so gradually, I didn't even notice.”

From the episode “Lisa’s Wedding” aired

The hotel will be erected in western Beijing's Mentougou district some 30 kilometres (18 miles) from the Chinese capital's centre, the state-run BeijingMorning Post said in a Thursday report, quoting a local parliamentary meeting.

It may only have been the fifth day of 2011 year but feel good story of the year may have just happened in my own back yard.

The man with the golden voice: Ted Williams, a panhandler in who literally overnight went from homeless to having a dream career doing voice over work with the Cleveland Cavilers, the NFL and other media outlets.

Look at the timeline here. First a private citizen records a video, an audition video if you will, and posts it to YouTube (owned by Google Inc. NASTAQ: GOOG).

While most media types will focus on the inspirational factors of his story, such as his overcoming addiction; his spiritual awakening and surviving homlessness; the real story here is that Williams became a success without the help of government!

Ted Williams has immense vocal talent. From the YouTube Video where he his just goofing off talking about classic sole, I find myself wanting to hear that voice.

He also has what it takes in the free market to succeed. He tried. With little resources other than a hand-printed sign and a busy intersection he auditioned until someone noticed him. Soon he will be the voice of NFL Films, the Cavaliers and many, many commercials I’m sure.

Humble beginnings are common among ’s great success stories. Facebook started in a dorm room. Apple Computer began in a garage. On the other hand, Amtrak finds it’s roots in congress.

Posted by azoric at 6:07 AM No comments: